It is a pleasure to represent the Chief of Army at the Melbourne event of the Spirit of Australia Foundation. When I contacted General Barry, I was given a wide brief, and guided to talk about current matters, and what I am doing as part of the modern army. On reflection I understand this not to mean hearing me ramble on about my trials and tribulations and reliving personal glories.

So this afternoon I would like to share with you some of what I have learned about the current Army. A positive perspective from a Program Director in Land Systems Division based at Victoria Barracks, an organisation that acquires and sustains predominantly Army capabilities. I hope that I am able to reinforce that, while times may change, meticulous planning and the integration of military effects that General Sir John Monash championed so skilfully, remain equally relevant to the modern Army.

Before I go any further though, I thought I would reflect quickly on how I ended up in the army in the first place.

On leaving school I pursued my interest in Economics, completing a degree in economics and finance at Macquarie University. I had planned to be a banker, with an ambitious eye on the millionaire factory more commonly known as Macquarie Bank. For whatever reason, I just could not see myself a 21 year old enjoying long days bearing a white collar.

Instead I thought, I’ll defer banking for a time – go to the Royal Military

College and seek some adventure, do the minimum of 4 years and then become a banker. But I stayed with the army and certainly extended the adventure to many troubled countries.

There is something special about the service aspect of the military, similar no doubt to emergency services and health services, aid and charity workers, indeed so many professions where your motivations at least in some part are about serving, and serving a purpose that you believe in.

Looking back it is now interesting to reflect on the pride of wearing the uniform and the broad public respect for the Army and to contrast that with Royal Commission findings concerning culture amongst elements of the banking sector an area for which I maintain high interest.

Back to the modern Army – the insight that I would like to share emanates from the escalation of Army’s commitment to global operations across 2009-2011 in both Afghanistan and Iraq.

My perspective, is from the organisation that supplies equipment to deployed forces, that is the Integrated Soldier System Branch, everything from boots to rations, from rifles to packs, mobile hospitals and my area in Clothing. The intensity and tempo of these operations revealed numerous gaps and issues identified by soldiers.

After rapid deployments to a number of very different operating environments starting with east Timor in 1999, the common theme was “Australian troops struggled under the weight of their equipment and were increasingly vocal that their body armour just wasn’t suitable for their demanding mission”

There was no shortage of internal and external reviews of the Defence Acquisition business that validated the soldier feedback. Any number of media articles and searching political interest exposed the need and priority for a fix.

Fundamentally the Defence Capability Acquisition and Sustainment organisation has a responsibility to equip the land combatant as well as possible, to enable them to perform at their best and to come home safely, a responsibility in keeping with the legacy of General Monash’s care for soldiers and his evolution of tactics that enabled soldiers to perform at their best.

Army had many small projects, individually well managed, by motivated and well meaning people who acquired thousands of items. The level of integration across these items was not as high as we are able to achieve now. This was not the result of a lack of understanding of the importance of integration, more that Army was emerging from a period of low operational tempo and low levels of investment in equipment over that period.

A sharp rise in operational tempo, with forces operating in multiple combat theatres each with unique threat environments, meant that each equipment demand was provided a solution that was good for purpose, but could not support the range of emergent operational needs. An example is body armour, with the project acquiring a technologically advanced “modular combat body armour system’ that maximised protection, but it was heavy. A great outcome for a particular purpose, not equally suitable for all threat environments. .

In time, soldiers coined the term the ‘Christmas Tree Effect’ as more and more items, that were perfect in isolation, were added with the soldier representing the aggregation of myriad individual components. The sum of the parts compromised the effectiveness of the whole, impacting agility, survivability, comfort, and endurance.

So what changed to make an improvement. Well it wasn’t what we often see; the tendency to design new processes, to apply more workforce, to increase budget, to implement external recommendations, or even to devise a new organisational structure.

While helpful, these were not the source of the solution. The change was adopting a collective approach to a single problem, that is recognising the soldier as the capability.

Major General Kath Toohey, Head Land Capability addressed this at yesterdays Defence and Industry conference in Canberra. She  explained the soldier is the centre and we are building an enduring, iterative and adaptive soldier combat system, that is the building block for the broader land capability.

This soldier combat system must empower ADF combatants to manoeuvre, communicate, detect, and engage threats and to survive and win the close fight. A demanding range of needs.

This means that success is conceived through optimising the soldier combat system not each of the components. Operational feedback was increasingly influencing the perception of the trade-off between weight and protection. This required a deliberate and top down approach to managing the range of variables such as weight, comfort, safety, thermal burden, bulk, power sources etc.

As alluded earlier, this outcome is not the result of adjusting processes, resources, budget, or structures. The change in approach came from vision, leadership, strategy and inclusion. I would hope that Gen Sir  John Monash would endorse such an approach, an approach that drives a singular purpose, the harnessing of individual effort, iterative technological innovation, and industry partnership that combine to optimise the soldier combat system, emphasising safety for our personnel on the front line

Importantly I believe this aligns with the Chief of Army, Lieutenant General Rick Burr’s recently presented strategic direction – an Army in Motion, in which he highlighted 6 transformation themes – the first of which was the soldier, who he described as the core of the capability system – multi talented, highly skilled, resilient and adaptive.

To conclude, when you see right, it is energising and self fulfilling, an outcome for which we can be proud. To me this demonstrates the modern Army. Aside from the longstanding values of courage, teamwork and initiative, there is a level of sophistication, systems thinking, business acumen, and even smart buying that has provided marked improvement to Army’s foundational capability – the soldier combat system. 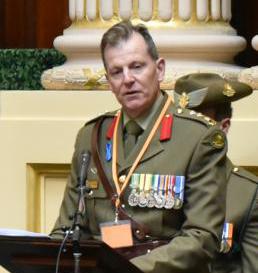