Watch Dr. Brendan Nelson’s address at the dedication of the new sculpture: https://www.awm.gov.au/commemoration/speeches/MonashSculpture

On the centenary of the battle of Hamel, the Australian War Memorial has dedicated a new sculpture in the Memorial’s grounds commemorating the life and achievements of General Sir John Monash.

Memorial Director Dr Brendan Nelson said Monash deserves to be remembered as one of the greatest Australians ever, not just for his accomplishments as a military leader but also for his efforts to rebuild a divided nation after the war.

At le Hamel, Monash commanded an operation in which Australian and American soldiers fought beside each other for the first time. A series of stunning victories would ensue – Amiens, Mont St Quentin, and the capture of Péronne, and the breaking of the Hindenburg line.

“In the aftermath of the war, Monash was appointed Director-General of Repatriation and Demobilisation, efficiently repatriating 160,000 soldiers in eight months.”

“It is his great work as a proud former citizen-soldier and commander, combined with his passion for our nation, that inspired us to remember him as a nation-building civilian and not just as a military commander,” Dr Nelson said.

The dedication was attended by Sir John Monash’s descendant and Director of the Spirit of Australia Foundation, Michael Bennett.

Michael is pictured here with Jillian Segal, the Chairman of our partner organisation  the General Sir John Monash Foundation 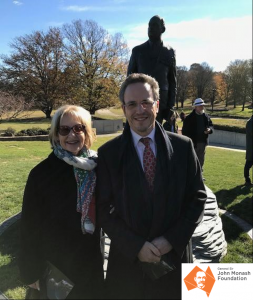