The Governor-General, His Excellency General the Honourable Sir Peter Cosgrove AK MC (Retd), and Lady Cosgrove led Australia’s representation at the centenary memorial service for the Battle of Hamel during their visit to France on 4 July.

Lasting only 93 minutes, the 1918 battle led by the then Lieutenant General John Monash was a decisive success for the Australian and Allied forces in a war previously defined by incremental advances.

The Governor-General delivered the commemorative address and laid a wreath in remembrance of the 1200 Australian casualties. His Excellency met Australian families of descendants who fought at Hamel and also visited the new Sir John Monash Centre at Villers-Bretonneux.

The Governor General was joined by Minister for Defence Personnel, the Hon Darren Chester MP, and Chief of Army, Lieutenant General Rick Burr, AO, DSC, MVO, at the ceremony at the Australian Corps Memorial in the town of Le Hamel, France.

Lieutenant General Burr said although the Battle of Hamel was a small operation in comparison to others fought on the Western Front, it held great significance.

“The Battle of Hamel was the first time the Allies had fought under Australian command, with General Sir John Monash, GC, KCB, VD, appointed Commander of the Australian Corps only weeks prior,” Lieutenant General Burr said.

“General Monash used a strategy that saw infantry, tanks, artillery and air support working in conjunction on the battlefield for the first time under Australian command.

“The Battle of Hamel was a deliberate, calculated and swift attack, where the efforts of the combined forces retook the town of Le Hamel in just 93 minutes. In that time the Allies captured 1,600 enemy combatants.

“His effective planning inspired the larger offensives in the months that followed, which helped lead the Allies to ultimate victory in November 1918.

“The Battle of Hamel also marked the first time Australia and the United States fought together on the battlefield, with 1,000 American soldiers attached to the Australian Corps at the time of the battle.” 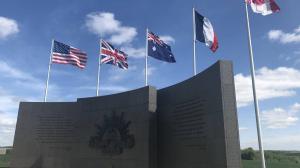