On 24 April 2018, the centenary of the crucial Australian victory at the Second Battle of Villers-Bretonneux, the Sir John Monash Centre was launched by Prime Minister Malcolm Turnbull, together with the Prime Minister of the Republic of France, His Excellency Monsieur Édouard Philippe.

Set on the grounds of the Villers-Bretonneux Military Cemetery in northern France, and adjacent to the Australian National Memorial, the Sir John Monash Centre is the hub of the Australian Remembrance Trail along the Western Front, and establishes a lasting international legacy of Australia’s Centenary of Anzac 2014-2018.

The Centre is named after General Sir John Monash, who led Australian, British and American soldiers in key battles during 1918 at Le Hamel, Amiens, Bray, Mont St Quentin and Peronne in a series of victories that shortened the war and brought about Allied victory. His success in the famous victory at Le Hamel would become the template for military operations that followed.

In addition to commemorating the outstanding leadership of Sir John Monash, the Centre ensures that Australia’s story on the Western Front is preserved and told in the words of those who served. The experience is designed so visitors gain a better understanding of the journey of ordinary Australians — told in their own voices through letters, diaries and life-size images — and connect with the places they fought and died.

In his opening address, Prime Minister Turnbull reminded Australians to

‘never forget the 11,000 fallen Australians whose bodies were never recovered – their names etched on the Australian National Memorial. Brothers, husbands, fathers, sons … All volunteers, every one of them, from a population of less than 5 million. Sixty thousand never made it home .… And in the midst of the stone and steel and glass of this serene monument, we know that the best way to honour the diggers of 1918 is to support the servicemen and women, the veterans and the families of today.’

In his dedication, French Prime Minister Edouard Philippe paid tribute to the Australian soldiers who defended France to whom the French feel so indebted.

‘I could not help thinking of the terrible loneliness which these thousands of young Australians must have felt as their young lives were cut short in a foreign country … A faraway country. A cold country whose earth had neither the colour nor texture of their native bush… We will never forget that 100 years ago, a young and brave nation on the other side of the world made history by writing our history.’ 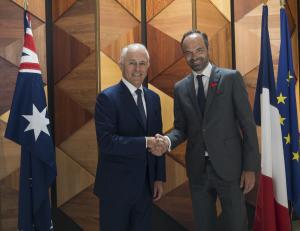