The Australian cricket team has spent several days learning about the sacrifice of Australian forces on the Western Front a century ago.

Led by team captain Tim Paine, the cricketers embarked on a quiet act of commemoration to honour a past generation of young men who fought and fell on the now silent battlefields of Belgium and France.

Their three-day itinerary included locations such as Fromelles (where on a single day's fighting in July 1916, almost 2,000 members of the Australian 5th Division were slain) and Passchendaele (where in two months of fighting in late 1917 amid thick mud that rendered men, machines and animals immobile, more than 30,000 Australians were killed, wounded or gassed)

They visited the Tyne Cot cemetery and memorial (the largest Commonwealth War Graves Commission with almost 12,000 Allied servicemen buried within), and Menin Gate at Ypres, which has hosted a rendition of The Last Post every evening since 1929 – save for the four years of German WWII occupation. 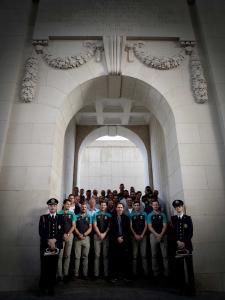