Why write MONASH AND CHAUVEL? It’s now nearly a century since the deciding year of the First World War, 1918.

I wanted a book that encapsulated the impact of the First AIF in the two major fronts of that War. The best way was to combine the two narratives in one. By a bit of luck it worked. I found that when General Sir John Monash, Commander of the Australian Army on the Western Front, was active in battle with his diggers, General Sir Harry Chauvel, commanding the Desert Mounted Column (75 per cent Anzac Light Horsemen, and cavalry) in the Middle East were inactive, and vice versa. This allowed a smooth chronological story.

Research also discovered the strong link between the two commanders, especially in informing each other of their progress on the two war fronts.

Monash and his diggers were not fighting above their weight in the Great War. They were the weight in the critical second half of 1918. Monash controlled the biggest single army corps of 20 on the Allied side. It was composed by 208,000 soldiers and won the decisive battles that defeated the enemy and ended the war.

In a 100 day Blitzkrieg, the original one of the 20th Century where tanks were used on a large scale, they liberated 116 French towns and defeated 39 German divisions, including the crack Prussian Guard.

The most telling victory was at the Battle of Amiens from 8 to 11 August 1918, in which Monash’s force, with the Canadian Army in support, smashed two German Armies in 48 hours.

The Germans lost 28,000 dead and another 70,000 wounded. These are shocking figures but help explain the Australian and Canadian impact, the most brutal of the war.

The key German Commanders, including Commander in Chief General Erich Ludendorff, all commented that this battle was the most telling of the war. Ludendorff received the greatest shock of his life. He thought he would crash through Amiens, march on to Paris (only 120 kilometres south) and win the entire war. Instead, he had a nervous breakdown and had to see a psychiatrist.

Heinz Guderian, who, in World War 11, would command Hitler’s Panzer Divisions, summed up the Battle of Amiens best when he said:

‘They (the Allies) had their boot on our throat and they took it off.’

This was in reference to the fact that Monash was asked by the British High Command to park his army South East instead of his desire to push on East and end the entire conflict three months earlier than 11 November 1918 when the armistice was arranged. He had all the evidence that the German Army would be forced to capitulate quickly. Monash was motivated to finish war, but the British High Command, not understanding the massive impact of the Victory at Amiens, erred. This mistake meant that about a million more soldiers from both sides would die.

A century later, Australians have lost the battle for comprehension of the real history---the key events since federation in 1901, particularly the Great War. The universities don’t touch it; Secondary institutions largely ignore it. For the average student, and adult learner, the Great War is literally ancient history. The documentary images of officers with varying moustache styles; flickering black and white moving pictures of tanks; diggers in trenches; and sad men marching somewhere, never seem to have a cohesive, explanatory narrative.

After 2018 the footage will be tucked away in musty archives, or computer files.

In 2018 scores of books are being published on the Great War. The British view, and to a lesser degree the American perspective, will swamp the media and the bookshops.

Unfortunately for the integrity of the real history, the Australian impact will be swamped and drowned, again.

History is repeating itself. In 1919, Monash published his important tome, The Australian Victories in France in 1918.

Monash wrote 2000 words a day, and rushed it out knowing that hardly anyone, except for him, had a grasp of what really happened in the critical moments in 1918. He was the most feted man in the UK in 1919, at least among the British elite. It was aware of his second-to-none contribution to ending and winning the war.

But Monash was gone from the European scene at the end of 1919. The old adage that ‘success has many fathers,’ is pertinent. Innumerable books came out suggesting other than the true version of the major events. It was hard to find heroes among the British Command on which they could pin the badge of victory. A hundred safe years later they are struggling to find them once more.

And Monash and the diggers will be ignored again, outside Australia.

Yet some developments are encouraging and the elevation of Monash is a century overdue.

The same applies to Harry Chauvel with his grand contribution in the Middle East.

Most people have seen the film, Lawrence of Arabia, which is one of the finest cinematic productions of all time.

There is no doubt about its brilliance. But what about its authenticity; its factuality; its integrity?

The Turks had controlled the Middle East for 400 years. But from 1916 to 1918 that long-running dominance of the Arab tribes ended.

The overwhelming propaganda has been that the Englishman Major T E Lawrence---Lawrence of Arabia---and his Arab force defeated the Turkish Army. In keeping with that propaganda, Osama Bin Laden’s favourite book was Lawrence’s Seven Pillars of Wisdom, on which Lawrence of Arabia is based.

The bedrock integrity is this:

Lawrence and other British military spies did an excellent job in organizing the disparate Arabs tribes to pin down ONE Turkish Army on the Hejaz railway in Jordan and Arabia. That still left two Turkish armies positioned in the Sinai, Palestine and Syria.

They were defeated primarily by the British Desert Mounted Column. This was made up of 75 per cent Anzac troopers. That Column was commanded by Chauvel.

The first is 4 August 1916: The Battle of Romani. The Turks had belted the British on Gallipoli in 1915, and in Iraq early in 1916. The Turks were confident. They brought a force of 25,000 soldiers from Turkey into the Sinai Desert with the sole of aim of taking Egypt from the British. But they had not allowed for an important factor: they would be fighting 1500 Anzac troopers, who had their horses. The Turks had to be stopped before they could reach the wells---the water---at Romani.

During the Battle there were many courageous acts as the overwhelming number of Turks attacked, and the Australians rolled back towards the wells. They were under orders from Chauvel not to engage the Turks hand to hand but to carry out a tactical retreat.

Two significant actions occurred in the six hours of heated engagement. The first was with Major Michael Shanahan, and his horse, Bill the Bastard. They managed to carry four stranded Tasmanian troopers off the battlefield in one ride. The 740 kilogram Bill the Bastard managed to take a load of 5 men weighing 400 kilograms, through sand on a three kilometre ride.

That job done, Shanahan went back into Battle with Bill who ran for several hours.

He only stopped when Shanahan was badly wounded in a leg which was later amputated. That mighty mount carried an unconscious Shanahan back to Romani for medical attention. After his efforts, Harry Chauvel ordered Bill the Bastard should never again be used in battle. He was too much of a grand symbol for the Light Horse to be risked. He saw out his war days as a pack horse and died on Gallipoli in 1924.

The second important symbol of that battle was Harry Chauvel himself. He showed courage and intelligence by not bringing out his reserve brigade until dawn. The two sides had fought to exhaustion through the night. By 6 a.m. the Turks were on surrounding Dune Mountains encroaching on the all- important wells at Romani.

But the temperature was 50 degrees centigrade. The Turks had no water or food. They had spent most of their ammunition. The sight of a fresh Light Horse brigade curling out a camp and trotting in their direction was a moment that demoralized the Turks, and inspired the Australians.

Harry Chauvel was on horseback in full Command regalia at the head of the column. His delaying tactic led to the Turks retreating from the oven-like conditions.

It was the first major reverse for the Turks in the Middle East war.

The Battle of Romani turned the entire Middle East conflict on its head. The hunting army was from then on, the hunted.

In six ensuing battles in 1916 the Turks were pushed out of the Sinai into Palestine. Egypt, thanks primarily and almost solely to the Anzac Light Horse, remained British. It is an important moment in British and Australian history.

The second date is 31 October 1917: The Battle of Beersheba. Chauvel’s commandership was vital here too. 800 troopers smashed through the Turkish trenches against the greatest odds in cavalry history and took the town of Beersheba. The Turks retreated further north into Palestine. The Jewish migration to the region

began on a grand scale under British protection. It was the precursor to the State of Israel. It is another significant moment in history.

The third date is I October 1918. Chauvel sent 400 troopers under the command of a dentist from Perth, Captain Arthur Olden, to capture Damascus.

They were taking on 20,000 Turks in two Garrisons. The troopers captured Damascus without much more than a scuffle. Olden took the written surrender of Damascus and Syria from the Governor who was left there by the retreating Turks. Olden waved the surrender document to the 400 troopers lined up in a Column outside the Town Hall, and said:

Alexander the Great of Greece;

and Napoleon of France as the conqueror of Damascus and Syria.’

The troopers roared their approval and galloped on north in their relentless pursuit of the Turks.

This Anzac-dominated Column won the major battles against the two Turkish armies. Then Chauvel and his 34,000 horsemen swept across East to help Lawrence defeat the one Turkish army, which he and his Arabs had held in the many forts along the Hejaz railway. Next, Chauvel and the Anzacs led the way north through Syria---Damascus, Homs and Aleppo, with the Arabs in a support role.

One of the few things the Lawrence of Arabia movie got right was that the British Commander, General Sir Edmund Allenby, sent Lawrence back to England from Damascus. Lawrence was never involved in that final push by Chauvel that sent the remains of the Turks, led by the now vanquished Mustafa Kemal [Atatürk], right back over the Turkish border, and out of the Middle East after four centuries.

Despite the current lack of Federal Government support for Monash and Chauvel being promoted to Field Marshal status, future leaders, perhaps better informed and read, will see the merit in this. That will draw national attention to the two commanders’ achievements and hence the efforts of those 200,000 soldiers involved. But at this point, a century on from the major events, there is only one way to show the huge impact of what Monash and Chauvel and the men under their commands achieved; only one way to make the events of those days live again and give them an immediacy. That is through mighty cinematic dramas of events--- two blockbuster movies.

Yet caution is advised. Consider Wonder Woman the recent movie. At the end of it Wonder Woman, apparently leading Western forces, fights and kills Erich Ludendorff. The movie claimed that was in 1918. Ludendorff died in 1937.

The film is a ridiculous rendition of the Great War. But that is where comprehension sits 100 years on. Producers of ‘entertainment’ feel free to dramatise the 1914-1918 conflict anyway they like.

Only brilliant movies or even big budget TV series will take the high ground and shift public opinion towards the integrity of events. 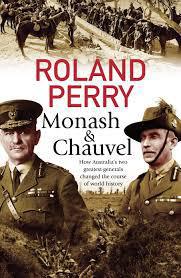